The ABC of Curating the process of student work?

"The key to excellence is this: It is born of a culture" Ron Berger An Ethic of Excellence. 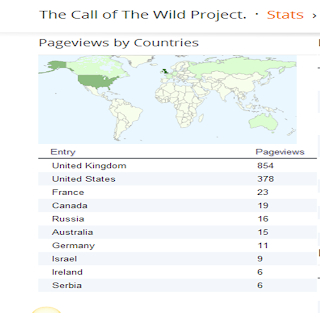 This post occurred to me during the Call of the Wild Project, when we showed the audience page of the blog we had set up to capture the process on Blogger to the students. Their response was complex; they clearly impressed themselves, they were THAT interesting, they realised that their learning was important to others, not just Sir and that they now had a responsibility to produce something of quality. This resulted in greater student motivation and engagement not only in the project but in the refelction of the process that it engendered. I believe that this experience has had a lasting effect upon the students.

As a result I wanted to capture this in future subejct based projects. So, I have simply repeated the process, although this time its one blog with three year 8 classes. However, the response of the students has been the same, just today the students entered the class and asked "how many visitors had they had?".

This reminds of a much repeated mantra at High Tech High, that students will only go to University as far as they have travelled. They therefore send them quite literally around the world. Obviously, I am not doing that, but these students are becoming more aware that there is a world out there. It's motivating.

The current Blog can be found here, it is has so far "set the scene" of the project and will hopefully develop with student drafts, critiques, and reflections. I think it captures some of the teacher planning that has went on before the project began.

I am hoping that it will create an authentic audience for their work.

The second role of this blog is to build a resource for students to use. Some of these will be blatant Science resources such as useful weblinks and useful Youtube clips. Some will be the work the class generates that aids learning and the production of quality, such as success criteria.

Other uses will be an aid to reflection, so that the process is clear and the progress in their learning and product obvious. It is a great way to use some Daniel Willingham's advice such as "Praise-Effort, not Ability" (I'm sure that's Dweck's) this made easy as student can SEE the effort they have put in, they will be able to see "The hard work paying off", and I am sure it will show how difficulties (and perhaps" failures) are a natural part of learning ".

All in all, I hope the public display of these things will be special, and create a useful memory hook of "what was I doing when I learnt that?" From the few student reflections on there already it is interesting that the content knowledge  has been prominent. My favourite being a quote by an unlikely student, who said "The most difficult part so far has been deciding where to draw the arrows to show where the forces act upon the object". If you knew this student, you'd be as pleased as I am. It is his longest response to date, and his understanding (and precision of his thoughts) are simply heartening. He impressed himself too.

...and not just for the final project. In fact, the project can look after itself in that regard, students think it's a useful, challenging and enjoyable thing to do. The part I really want them to care about is the process that they are going through.

When I consider why I value Project Based Learning, partly it's the control I gain over the content, but mainly it is our opportunity to develop (and value) the attributes and skills that society (well the non political part) values. So whether you are going to assess these or just encourage them, to use the dichotomy of the Buck Institute, then making them obvious and putting them on show is important for your students and the culture of your classroom.  It will play an important part of shaping how we want our students to be in our schools and eventually in our community.


http://www.hightechhigh.org/unboxed/issue8/want_to_get_home_on_time/ I hope Mark Moorhouse from Mathew Moss High School can forgive me in the hatchet job of my summation of his article.

"How we teach, the relationships we build and maintain are essential in the formation of communities which we (should- my addition) serve. We accept that academic success is vital but so are the people that schools and teachers influence."

I know the ABC's here are contrived and overlap, but curating a project blog values a neglected part of what I do as a teacher, and that's to build a culture.

I hope you join us.