A rewrite of last years plans has presented and opportunity to develop this essential part of literacy ( and here too) I initially thought the content to be taught would prove to be a good for a "presentation" using the criteria, we had used in Year 7. Although, it was tempting to build upon this the idea  it was dismissed in preference for a more dialogic approach that leads to learning.  I have been interested in developing this with my students ever since the sage advice from Geoff Barton (particularly on slide 51) during a fortunate visit for some INSET. This HTH unboxed has also been at the back of my mind for sometime and has been useful in pondering how to plan this for my students.

I was fortunate that I only had to rewrite most of one lesson for this to tackle this inadequacy, when I stumbled upon this fine teaching video from the Teaching Channel. all became clear. This post is a chance to share the methodology I am planning to use, to help make speaking and listen a key part of how we will learn Science.


The "Fishbowl"  will be set up as following.
The  students will be split into three groups. Each group will have a go at each role. The roles can be summarised as:


Role 1- Speaker- They will be in the middle discussing the questions and dilemmas.


Role 2- Coach- They will listen out for how well a particular panellist is communicating, use of key language and connectives. They will debrief them at “half time”.


Role 3 – Observer- They will be summarising the debate so far, listening out for coverage of the different energy resources, evidence used, the questions asked and answered. They should produce a set out notes and will be asked to feedback to the class the important/useful/interesting comments made at half time and at the end of the discussion.


Each Fishbowl will run for 10 minutes, split into two halves with a 5 minute coaching halftime.
The “Speakers” will discuss their response to the following big question which has been the focus of study in the preceding lessons.


Do we still need fossil fuels?"
The following sub questions will help the students discuss the evidence.

Why are we considering not using fossil fuels?


If we don’t use fossil fuels what should be used to meet the electricity demand?


If we do use fossil fuels how do we ensure that the pollution is not a big problem?


Are the alternative fuels up to the job of meeting our energy needs?


What should be the energy production strategies for the UK to ensure 24hr year round electricity production that meets demand?


How could this be different for different parts of the world?


Following the Fukishima nuclear disaster – what would you recommend for Japan?


To set this up, with each class I intend to describe the roles and issue the observation sheets and success criteria.

Coaches will have a sheet like this, which they will use to observe and feedback to one other student. 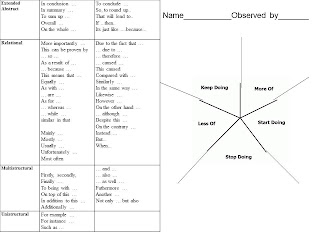 While the observers will have a checklist of what content should come up in the whole conversation. 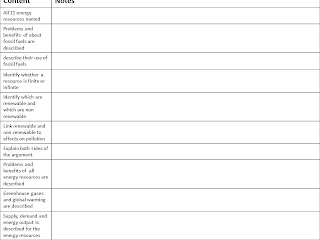 It will also stressed to the students that their notes and their experiences are important here, this will be a useful revision of the learning of the previous lessons.


I will only now place the students in threes, to manage distractions, and then ask them to number themselves. Once done, I will assign a role to each number and establish an order for the conversations.


minutes to prepare potential responses and familairise themselves with the success criteria and feedback sheets. I am hoping they will use these resources to pick up ideas of how to phase, at least their opening gambits during the conversation.


The first discussion will now take place, split into two halves of five minutes. This time is arbitrary and largely determined by their age and the amount of content expected in the conversation. At half time the observers will be asked to summarise the key points made so far,suggesting what might be missing? What content or evidence could the speakers be using?
I will also  tally chart the contributors collated, which is a powerful way to provide non-judgemental feedback upon speaking, those that have avoided or minimised their interactions will be challenged by cold hard facts.
The coaches will then be given opportunity to  quickly feedback what connectives have been used well so far to the whole group.


The groups of three students will then briefly meet to receive specific feedback, using Kind, Specific and Helpful protocol. 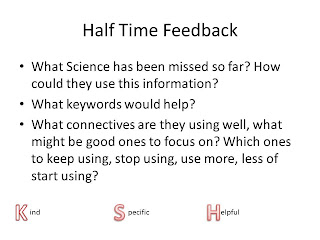 I think the retrospective starfish, will help students frame this in a positive constructive way, coupled with a selection of connectives will help focus students on how they communicate detailed scientific ideas. I expect this halftime  feedback to have a noticeable impact on the second half performance.
To conclude this session the observers will be asked summarise the conversation, again highlighting key concepts raised in the conversation. The coaches  will then be asked to identify what the speakers did better in the second half. It will be important to catch the students doing better here. A  similar lesson structure using SOLO taxonomy and connectives had a positive impact upon student conversations.


The students then rotate roles.
The reflection.

A debrief will be held as aiet written session to aid reflection on personal learning, with the students responding to the following questions.


How well did you speak during the debate? What did you do well? What would you try to do better next time?


What connectives did you use? How did they help you communicate?


Why is it important that we develop our speaking skills?


This is the planning I will endeavour to record the conversations and half time feedback on Soundcloud and post them in a linked post.
Posted by DKMead at 18:48