Having returned home after (what appeared to be) a great lesson with 8S2a on a Friday afternoon, I have decided to see exactly how successful I have been, if indeed I have. My gut feeling about this is that the students had done well, engaging in quite technically and cognitively difficult conversations; planning and setting up a scientific experiment.

They have been testing the 5 second rule, that food dropped on the floor is safe to eat if picked up within 5 seconds. The students have been challenged to think like scientists as I decided this was the day to try out the scientific thinking skills I have been developing over the course of this year. the specific one for today were: Clarity, Significance, Fairness and Relevance.


After an hour discussing, planning redrafting the students were tired but really getting into this kind of thinking. On return from a welcome lunch break the students set of to make decisions about the exact method they would use, and then set it up. The thing that struck me was the quality of they were having between themselves and with me were fantastically detailed and show remarkable reflection from the students.

At the end of the session I directed them to a wallwisher site, to answer the question "how have you thought like a scientist?" I was hoping to extract the kind of language I had introduced them to earlier, and from this be able to reflect upon their successes and then decide the next steps. They had around about 5 minutes to do this. A simple quick model of efficient assessment for learning if I do say so myself! Let see if it works and does it back up my gut feeling. I am getting quite into evidence based teaching at the moment. I am writing as I analyse so this could turn out to be a damp squid of a post. The important thing for me is that the process is making me thinking about what my students said or did.


So the outcomes for this and the next lesson are:- 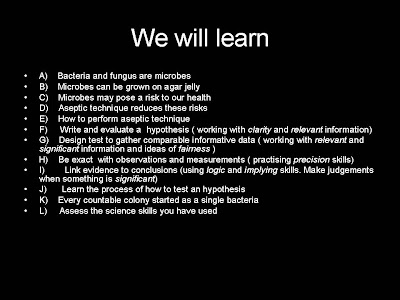 And here are their end of lesson reflections 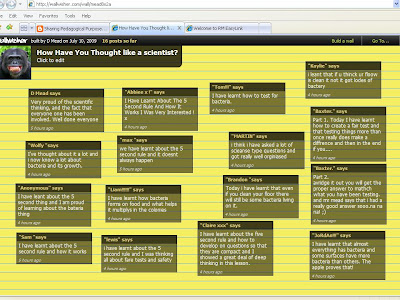 The first thing I notice is that the word bacteria is used frequently, which indicates that outcome A is sorting it self out. I was very conscious in planning this lesson that the content part, as small and would receive no directed teaching activities, as students should begin to pick these up through the activity. It seems that the research is right. I can safely assume that I will not need to do anything extra about this outcome. The reflective question asked is intentionally not content based, but still this learning comes to the surface.

Outcome B is also represent in this brief review, with "Wolfy" referring directly to their growth, and Liam describing bacteria multiplying. I'm loving this so far. Even the conceptual knowledge, albeit a simple one,is being learned with a targeted activity.

The numerous mention of the five second rule is suggesting that the link between bacteria and risk to health is being made. Kaylie and Brandon also start developing this a little talking about even clean surfaces have bacteria on them. Despite this, I think this will be a valid place to start next lesson with a question like " Does the Five section rule keep you safe?" just to make the link explicit to all and it will lead to a discussion about evidence, which is where I want the lesson to head next.

One thing is beginning to emerge, and that is the confidence and the enjoyment the students have had from their learning. This is not an outcome but does suggest that learning has taken place. Despite me phrasing the review question as "How have you thought like a scientist?" a large number of students have started their comment with I have learned. Abbie even goes as far as "I was very interested". Abbie is never interested. Emily is proud and "Baxter" is obviously pleased with the praise I gave "so na na na na :)" She even knows what she was praised for.


I am also able to identify the students who have just focused on the content and not mentioned the process. So, when the class begins the end of activity debrief I will focus on these students. I will also have a chat with max to get him to explain his comment, I'm not sure what he means and I'm not sure he does either.


The area that I'm not sure these brief comments will give me is the procedural knowledge and the meta cognitive outcomes. Are they using the scientific thinking language introduced today. Tom's comment about how to test for bacteria, although not clear hints that the idea of a scientific test has come through. A few students comment upon their thinking one even describes it as deep (and I would agree with her, a marvelous student) and one other describes creating a fair test. I think there is a some awareness of their thinking.

"Baxter" has genuinely surprised me with her comments, normally a distracted and distracting student she shows a great understanding of the concepts in the lesson. Impressively she identifies the need to collect evidence to the question being ask.This means that she is at least aware of the need for clear questions and relevant data. She has picked up on two of the big themes in the lesson. This being outcomes F and G. This is pleasing, now does anyone else. Lewis talks about fare (sic) test and Clare talks about "developing" question. We did draft the questions and then I model my thinking on deciding which was a good one. The process is apparent. "JoRDAn" seems to be suggesting to be looking for proof, so this may indicate he is aware of the need to produce evidence again outcome G.

This is obviously a tricky decision, I think some students have grasped these concepts where others have missed the boat. This is a little at odds with some of the conversationa with the students. This is the great thing about formally reflecting upon lessons, I'm trawling my brain to look for evidence that my students were successful. "JoRDAn" was very perceptive about fair tests and identifying problems this does not come across in his comment. Putting it all in perspective, the fact that this is the students first introduction to the new thinking language and the reflection only took 5 minutes today. The signs are positive some students clearly understand. So my next step will be to recap the language and to keep modelling it, the final task in this enquiry is for the students to self assess themselves. I will introduce this material earlier in the lesson than I originally planned.


So, I've learned a lot about my students again not by marking books but by considering in detail the evidence the students presented. I have students to target for help, to praise. I have a lesson starter that is needed by the students, and have been able to amend my next lesson plan to support my students. A worthwhile hour spent not marking books.
Posted by DKMead at 19:08