While my class worked away on a research task today, as part of an enquiry style project. I pondered on how they were setting about the task, having been, if not clear fairly insistent that they read and then use a thinking tool to record their research notes. I have spent an inordinate amount of time asking the same inane questions "Why are you using PowerPoint?" and "When did I ask you to Present your findings"

Here lies my problem with ICT, it is a huge distraction to the thinking students need to do to learn. The metaphor "the tails wagging the dog again" is a regular battle cry in my room, and is the the reason for me insisting on the students using a thinking tool to process the information found.

So despite my class looking very busy i was curious.

Having read a very interesting article by Paul Pintrich, in Theory Into Practice.http://tinyurl.com/lxfl7y , which subdivides the strategies used to learn into three parts, Rehearsing, Elaborating and Organising together with metacognitive strategies (about the strategies used) and strategic problem solving. I simplified these and hope their do not loose to much of their meaning in the translation.

I drafted up a table to help them reflect on the processes they were using and armed them with a post it note. Asked them to write what strategies they had used so far and classify them against this grid. In other words what did they think the strategy helped them do with the information? 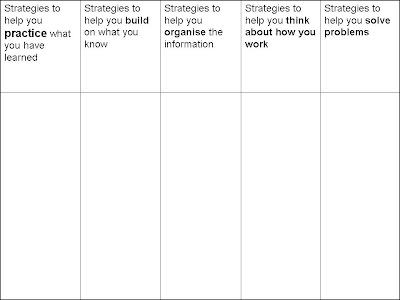 So here are the responses summarised. I have categorised them as either a strategy or not using smileys. I then discussed the original responses with the class, and hopefully the influence of this meta cognition can be clearly seen. 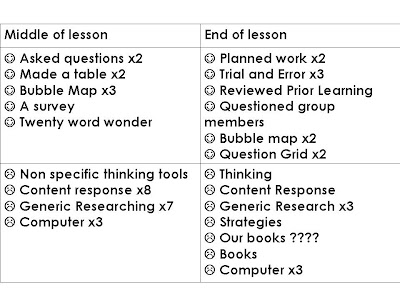 So, what do I think it tells me.

Firstly by the end of the session the students are commenting on more process at the expense of content with five less responses. Indicating at least some understanding that the process is important.

Secondly that the idea of research can be a noun, they can produce it by using a variety of processes. Although I don't think they are yet sophisticated enough to be specific in describing how, they have identified research as an actual strategy to research with less! Hoorah!

Thirdly, despite only getting one more strategy in the second half of the lesson, I was particularly pleased by the improvement in quality. For example students realising that they had to plan research, that they should consider what they and they peers already know. These are mainly meta cognitive strategies which did not appear at all in the first reflection. This is exciting.

So not bad for an hour. I think this simple strategy has raised the issue of meta cognition and pedagogical purposes for these students, a first step maybe but one that had to be taken.